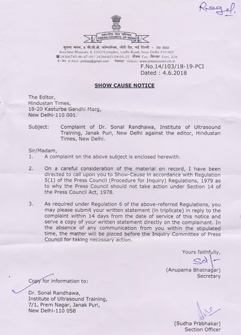 I hereby bring to your notice that the whole act of sealing of my center was illegal,unauthorised and a deliberate vicious preplanned move by the corrupt Delhi State PCPNDT officers(I have ample evidence of their corrupt practices mentioned later in my letter) in connivance with a certain organisation who are opposed to other doctors doing ultrasound other than radiologists.

Through a member of inspection team we came to know this particular organisation planned to target us.Since we train non radiologists doctors (including MBBS and above ) in ultrasound imaging it adds to their competition.

Our Institute is highly acclaimed not only in India but even outside for its teaching and training quality .Our students give tough competition in terms of competency and thus this organisation is strongly opposed to us and want the Institute to be shut down by hook or by crook.

In addition,Dr J.S.Randhawa one of the owner of the center has been petitioner in person in Delhi High court where he won case for MBBS doctors retaining their rights to do ultrasound as per PCPDT Act Section 2(p) and he is again a respondent in person in Supreme court .

The whole procedure was illegal and unauthorized as evidenced by the following facts:

1.By manipulation the West District Appropriate Authority was roped in to execute the whole plan though my appropriate authority is southwest.This has been clearly stated by the Honourable Delhi High court in its order dated 09-02-2018(copy attached)

2.Each and every allegation made therein is false and all was done on behest of Dr.Rajesh Sharma (one of the members of opposing organization)who was also part of the NIMC team that came for inspection.He was the one who called all media (but only Hindustan Times agreed to cover the story) and made number of calls to form a nexus with SPO,Dr.Satyajit,Director DFWDr.J.P.Kapoor west district nodal officer Dr.Souharda das.The news of sealing was disseminated to all members of the organization well before it was done as it was a pre planned move.I received calls from many of my friends just an hour after the inspection started that we have got news that your center is being sealed.

3.No reason for sealing was conveyed to me on spot.No panchnama was prepared and no independent witness was taken as mandated by law..I was not handed over any documents as required under the law.The inspection report was later fabricated .This is clearly evidenced by no signature of witness or owner on the inspection report which was later received by us after filing RTI Application.

5.My center is imparting Training in different branches of ultrasound since year 2000.It is the only center in India to be affiliated to Jefferson Ultrasound and Radiology Institute,Jefferson University Hospital,Philadelphia,USA which in turn is the only Institute in the World recognized by WHO (World Health Organization) for imparting training and knowledge in Ultrasonography.

Institute duly gives certification to the candidates after completion of training.It is not out of context to mention that The Indian Medical Council (Professional Conduct, Etiquette And Ethics) Regulations, 2002 states in Chapter 1.2 Maintaining Good Medical Practices which specifically states “physicians should try continuously to improve medical knowledge and skills and should make available to their patients and colleagues the benefits of their professional attainments”.

In addition, The Indian Medical Council (Professional Conduct, Etiquette And Ethics) Regulations, 2002 states in Chapter 7 point 7.10 “A registered medical practitioner shall not issue certificates of efficiency in modern medicine to unqualified or non-medical person.NOTE-The foregoing does not restrict the proper training and instruction of bonafide students,midwives,dispensers,surgical attendants or skilled mechanical or technical assistants and therapy assistants under the personal supervision of physicians” .It clearly states that a physician has a due right to issue certification of training even to paramedical personnel . It is relevant to point out that although non medics or paramedics have no bar on being trained (as per medical geneticist clause in PCPNDT) but owing to our stringently high standards the minimum eligibility to be trained by our Institute is MBBS for Indians.

6.Over the years my center has been periodically inspected as per PCPNDT rules by the appropriate authority inspection teams and never any objections have been raised.The last inspection was done as per rule on 31-10-2017 by south west authority under which my center comes and no discrepancies were noted.

8.Dr. Satyajit Kumar, State Programme Officer, PCPNDT cell of Delhi had stated to you that “inspection team did not find any documentation of the students that could confirm what medical course they were doing and whether they were MBBS students who met the criteria to be trained in using ultrasound machines”, whereas in response to our RTI dated 26.12.2017 (copy attached)Dr. Satyajit stated that no such press release has been made by him or anyone on behalf of the State PC-PNDT.

9.To prove their malafide intention further I would like to bring to your notice that as per law we had put in an appeal to the State Appropriate Authority which was received on 09-01-2018 and as per law should be taken up and decided upon within 60 days of receiving under Rule 19 PCPNDT.It was deliberately not taken up by the State Authority as evidenced by the RTI reply dated 10-04-2018 (copy attached).

10.We had filed a writ in the Delhi High Court again challenging their order as the previous writ was disposed (order copies dated 09-02-2018 and 01-03-2018 attached) wherein the honourable court had mentioned clearly that they are not the appropriate authority and should withdraw order within 3 days.

Here I would like to tell you that the DC (West) refused to comply with courts order and hence their representative lawyer Mr.Tripathi was reprimanded by the honourable judge strongly for the same.He profusely apologised to the honourable judge and accepted that the authority will pass orders in consonance with the court’s decision.

(ii) The team inspected the records that are to be maintained under PCPNDT .They are supposed to do this in our presence but we were allowed inside only initially and then were told to leave while they were inspecting them.All our staff was also sent out of the room.

(iii) Thereafter they also inspected all of our premises, checked and photographed all the machines.

(iv) Within an hour of beginning of inspection we got a call from Hindustan times that a PCPNDT inspection team has raided our center as we were doing illegal training and teaching and our center is sealed.They also told us that the story is ready to be published so the newspaper just wanted to have our version.

We were surprised and stunned as to:

(a)How come the press is already informed about sealing when they were still examining us and its been only 30 -40 minutes since they arrived.

(b)Secondly under which law teaching and training of doctors in medical subjects to enhance their skills is illegal?

At this juncture we got suspicious that something big has been plotted against us.

(v) A CME was going on in our center for which about 25 doctors had come.The members of the inspection team then started harassing and threatening the attending doctors as to why they came to attend CME and took videography of them too .We were shocked as nowhere in PCPNDT Act it is mentioned that they have right to do such things.

(vi) After sometime the National inspection team members left and Dr Satyajit was left with some of his subordinates.He then called up nearly a battery of about 10 policemen including an additional SHO.The area SDM was also called as he was the one authorised to do the sealing and seizure.

(vi A photographer from HT was clicking our photographs constantly and he told me that he has been called by Dr Satyajit.

(vii)Dr Satyajit then left and the district nodal officer Dr Souharda Nath remained with all the police and SDM West district.

Dr.Souharda and SDM West had some discussion and then ordered the sealing of the machines.We were not given any reasons in writing or verbally for sealing.Dr.Souharda just kept on repeating that we have orders from higher authorities.

(viii)While sealing of machines was being done ,Dr Souharda kept on preparing some report .Finally he prepared a report on which he wrote that there was illegal training going on and live scanning was being done on patients and the doctors who were attending were performing the scans on them which was a pure white lie.

We were shocked as to how could he even think of preparing a false report There was not a single patient scanned that day and no machine was operated.We were just teaching on the computer with powerpoint presentations.We said this is a blatant lie and Dr Souharda himself agreed that there were no patients. However he said that National inspection committee wanted him to write this way as such he was doing so.Dr Souharda then sensed that he may be in major problem in preparing a false report so he retracted and did not give any report.Till date we have not got any such report.

They made a list of all the seized and sealed things and took my signature on it forcibly under pressure by police saying we will give you one copy of this.But no copy has been given to us till date.No report for reasons of sealing was given.No copy of inspection report of NIMC was given

(x)Then they told us to show the DVR recording of the proceedings .We took them to the cctv room and showed the recording.Thereafter the area additional SHO disconnected the DVR and the SDM seized the DVR too and took it with them along with all other seized material.Hence the DVDR was added at the end on seizure memo.We questioned them as to why DVR is being taken but they gave no answer.

(xi)Next morning , 22 nd December there was a big news in Hindustan Times with a completely false and malafide statement of Dr.Satyajit .Each and every word of his statement is false and he has denied under RTI .

(xii)Finally they left without handing over any documents to us which are mandatory as per law.

I would also like to tell you that Dr.Souharda Nath, Dr.Satyajit,Dr.Saurabh and Dr.Devender who were all part of the PCPNDT team in delhi have already been removed from PCPNDT department after our complaint.Enquiry is already complete against Dr.J.P.Kapoor and soon he will also face consequences.

Now to take the things further,I bring to you the evidence of corruption and illegal activities of then SPO Dr.Satyajit and Director DFW who is head of PCPNDT too,Dr.J.P.Kapoor.

1.Dr.Satyajit(adhoc employee got himself posted as Nodal officer PCPNDT in west district with id no.133622) as SPO,PCPNDT impersonating as Dr.Satyajeet (Permanent employee id no 155305 posted at Tihar Jail.) .The transfer orders of false Dr Satyajit were sent to West district by

Dr.J.P.Kapoor via email. Later on investigation of our complaint,Dr.Satyajit was removed from the post.(All relevant documents attached)

2.Besides the forged transfer of Dr.Satyajit being done by Dr.J.P.Kapoor he also had been caught doing private practice illegally on a sting operation conducted by us.An enquiry committee was set up under Dean , Maulana Azad Medical college wherein we were called in to prove the authenticity of the sting and enquiry is complete.(link to sting video attached)

3 .When we brought to attention his illegal private practice and his orders facilitating Dr Satyajit to impersonate,he pressurized us from many quarters.We recieved a number of calls from many popular doctors of Delhi and even IMA officials asking us to withdraw our complaints against him.If required their names and phone numbers can be provided.

It is sad that a reputed newspaper like Hindustan Times published the news twice without verifying the facts or taking our version on it.In fact your newspaper seems like it is a mouthpiece of certain organisation,all the published articles are biased.

PFA All enclosures as mentioned in my letter at relevant places.

Judgment of Other States 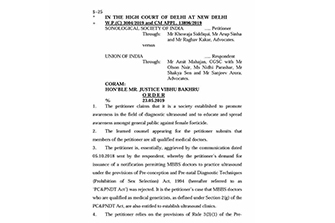 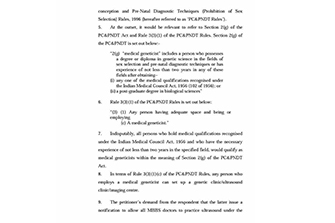 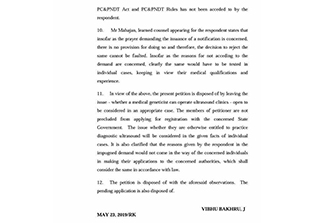 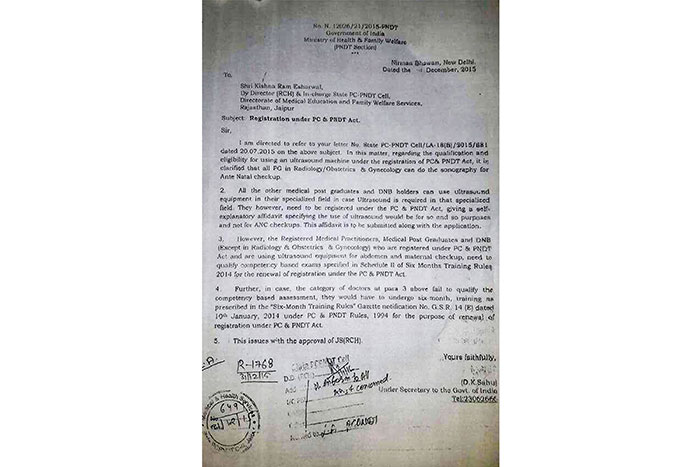 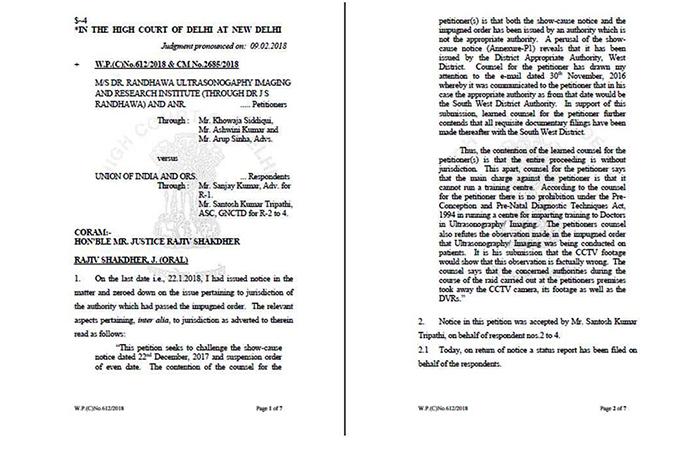 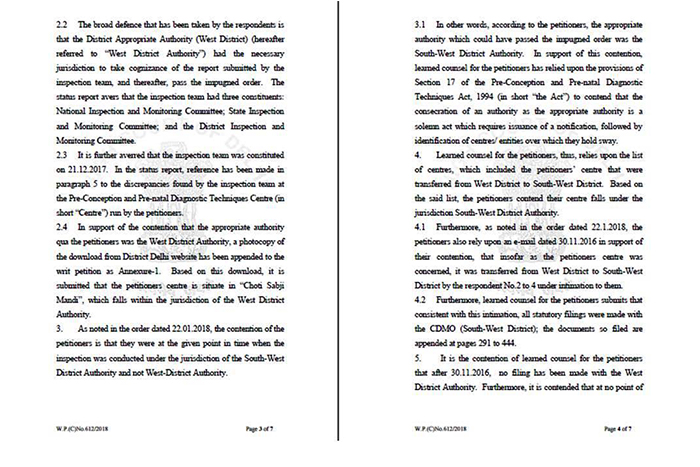 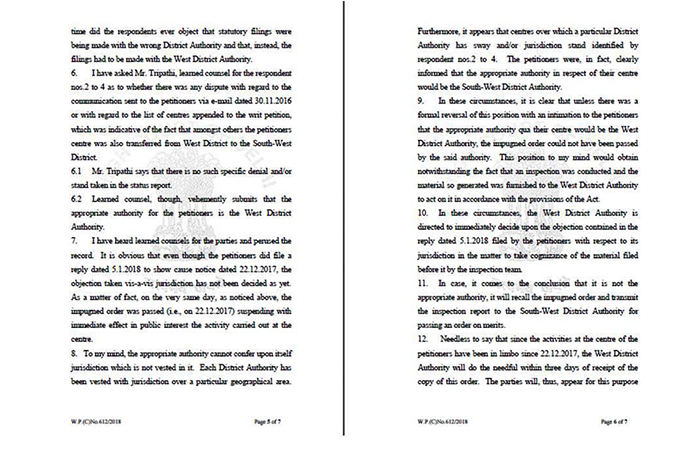 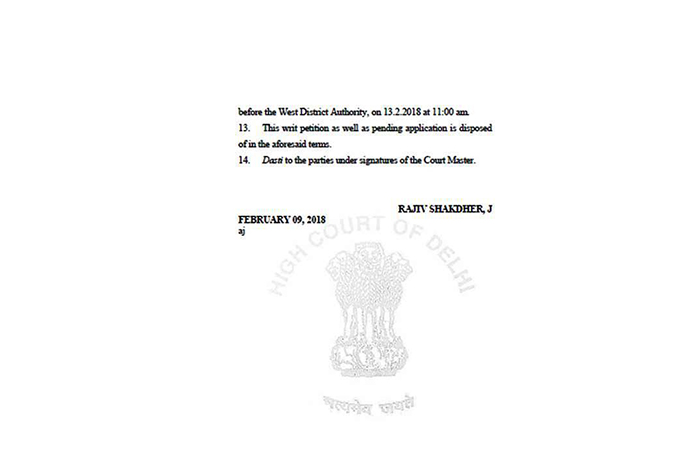 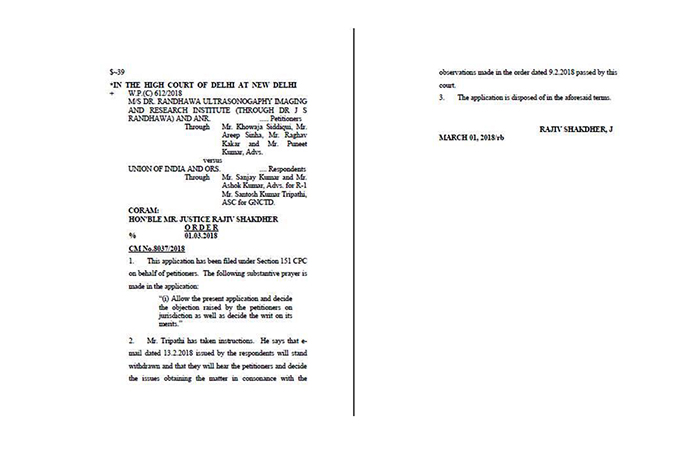 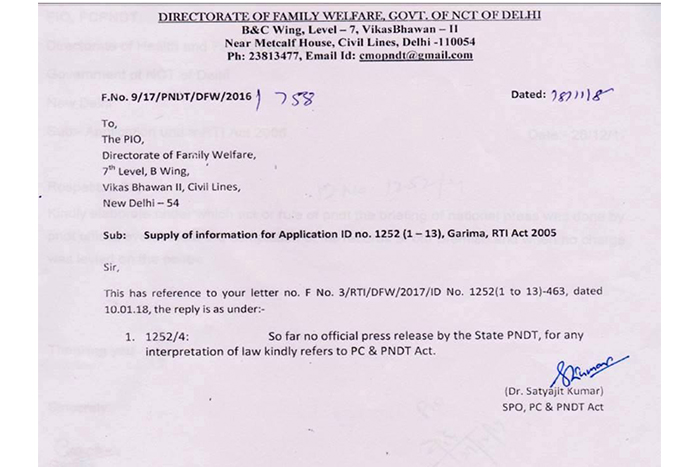 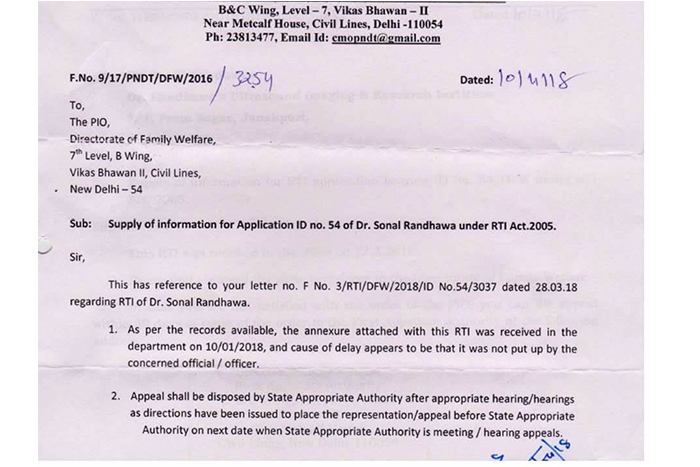 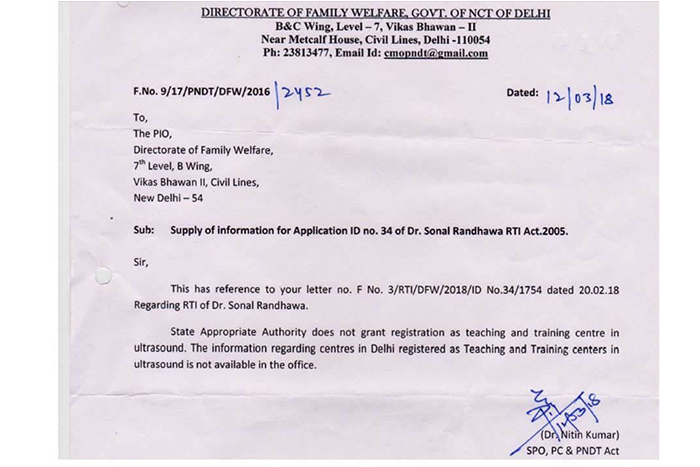 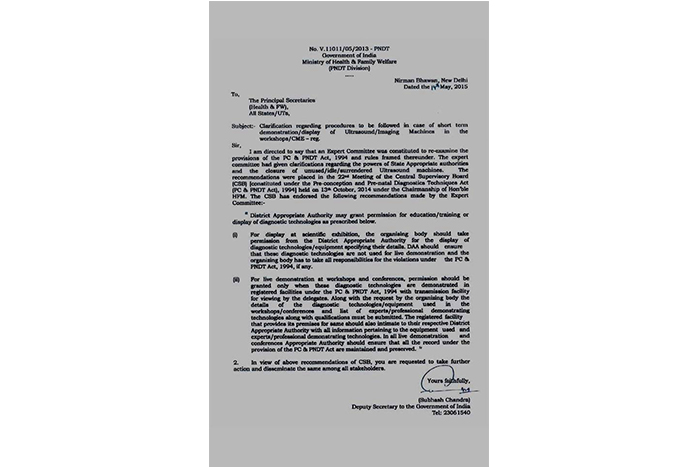 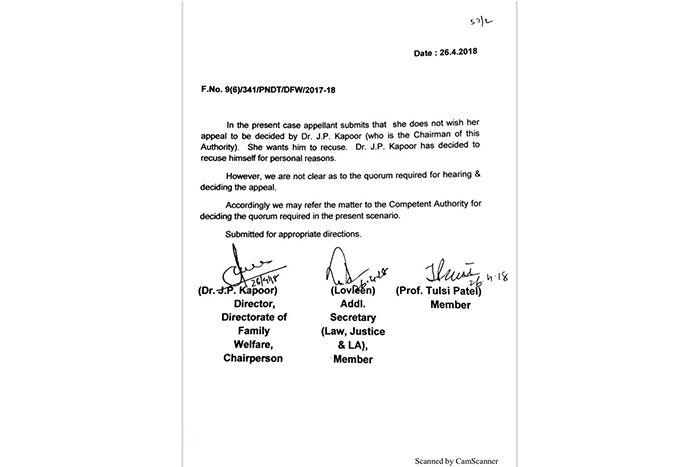 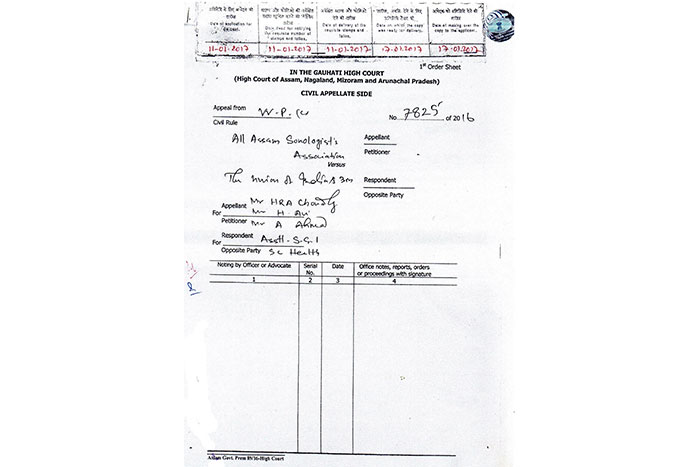 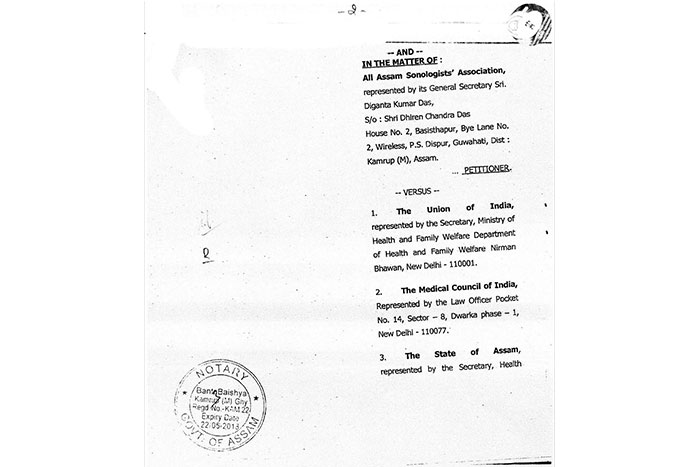 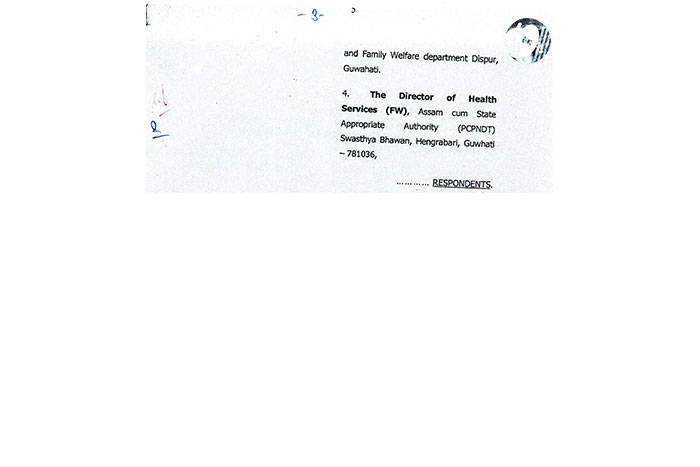 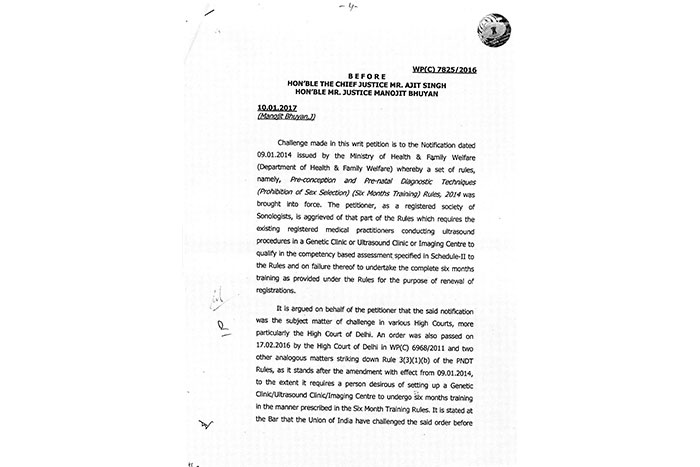 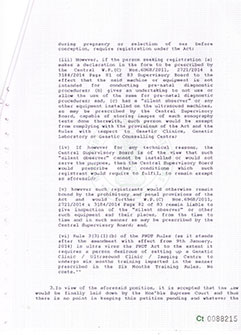 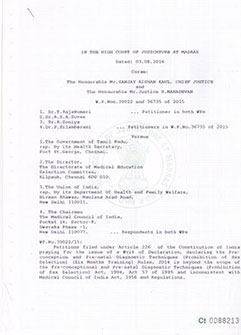 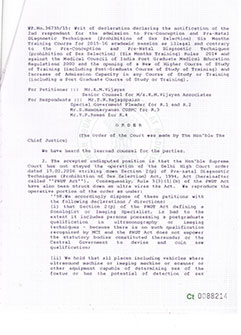 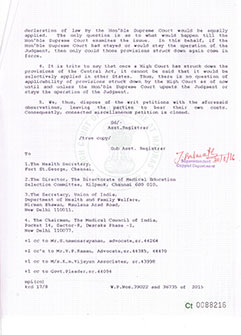 Glimpses of the Xth National Conference